Our list of things to see on the Ile de Ré !

The island of Ré is full of varied landscapes and breathtaking panoramas. From fine sandy beaches to salt marshes, dunes and wooded areas, the island has an exceptional nature, which can be appreciated from all angles. It is also possible to see on the Ile de Ré a preserved architectural heritage, a legacy of the island's century-old history.

7 places not to be missed on the Ile de Ré !

By crossing it, you will have an outstanding view of the northern side of the island. Almost 3km long, it is an integral part of the landscape of the island. Below, on the beach of Rivedoux, you will feel very small in front of this concrete giant. From afar, its curved shape will charm you, especially at sunset or when its 220 lights start to sparkle at nightfall.

2. The salt marshes and the national natural reserve of Lilleau des Niges

An ancestral know-how of the island, salt culture and its marshes shape the landscapes of the villages surrounding the Fier d'Ars, in the west of the island. It is in this area, more precisely in Les Portes-en-Ré, that the national natural reserve of Lilleau des Niges is located. Managed by the LPO (League for the Protection of Birds), it is a land of welcome for thousands of migratory birds, in spring as in autumn.

It is also a place where many species live all year round. The museum of the Maison du Fier will show you the mechanisms of this preserved ecosystem. Escape in a labyrinth of paths accessible all year long, and meet a remarkable biodiversity!

The 14th century church has been rebuilt several times. At the top of the 117 steps, you will be rewarded for your effort with a view of the harbor of Saint-Martin-de-Ré, its fortifications, and the surrounding villages.

In the middle of the day or at sunset, you will have access to an exceptional panorama!

4. The fortifications and the park of the "donkeys in pants" in Saint-Martin-de-Ré

At the Barbette Park in Saint-Martin-de-Ré, little ones will be able to ride on the backs of breeder Régis Léau's Baudets du Poitou, a protected species that has become true mascots of the Ile de Ré over the years. Built under the reign of Louis XIV from 1681 to 1691 by the famous military engineer Vauban, the fortifications of Saint-Martin-de-Ré are unique in their dimensions: 14 km of ramparts on a half-circle of 1.5 km!

Explore them on your own or take a guided tour of the fortifications, one of the many tours proposed by Destination Ile de Ré! Discover all these visits as well as those of our partners!

5. The bell tower of Ars-en-Ré

Built in the 15th century and recognizable by its black and white bell tower, this emblematic monument of the Ile de Ré serves as a bitter for sailors sailing in the channels.

Climb the steps to the top and you will be rewarded with a breathtaking view of the Fier d'Ars and its marshes, as well as the reserve of Lilleau des Niges!

Built in 1625 by the engineers Le Camus and d'Argencourt under the reign of Louis XIII, with a view to reconquering the Protestant places, the Fort La Prée was remodeled at the end of the 17th century by the engineer Vauban before playing, in the following century, the role of a secondary fortress for the benefit of the citadel of Saint-Martin-de-Ré

7. The Whale Lighthouse in Saint-Clément-des-Baleines

Culminating at 57 meters, the Whale Lighthouse offers a breathtaking panorama on the Ile de Ré and the inlets. Built in 1849 to reinforce the action of the old tower built under Vauban and classified as a historical monument, it was inaugurated in 1854.

At the bottom of the old tower, the Whale Museum reveals the fascinating history of lighthouses and their construction methods. An educational exhibition made of multimedia sequences, panels and objects that will enlighten young and old alike!

Which species can be seen on the Ile de Ré ?

The Ile de Ré is a preserved territory, partly thanks to the financing obtained by the ecotax of the bridge. It is part of the Parc Naturel Marin de l'Estuaire de la Gironde et de la Mer des Pertuis, and recognized associations such as ADEPIR, the LPO, Ré Nature Environnement, or the Tardigrades who work to protect its biodiversity.

So, before walking in the marshes or in the National Reserve Lilleau des Niges, go to the Maison du Fier in Ars-en-Ré. It will show you the flora and the birds, migratory or sedentary, that you might encounter! The Maison de la Dune in Les Portes-en-Ré will tell you more about the importance of the dunes and wooded areas in the ecosystem of the Ile de Ré. You can also visit the A.N.C.R.E maritaise in Sainte-Marie-de-Ré to learn more about shellfish and how to preserve the environment during your future fishing trips! You can also participate in nature outings accompanied by a guide to learn more about the nature of the island!
The Ile de Ré is also an important territory for the aquarium of La Rochelle. For example, it is on a beach in Ré that 6 turtles cared at the aquarium were released in 2018!

Where to see the most beautiful beaches of the Ile de Ré ?

Given the insularity and the size of the Ile de Ré, you will never be far from the beach! Whether you want to lounge, stroll or play your favorite sports, it will be difficult to choose!

If the Ile de Ré is quite flat, it is not impossible to get some height by climbing a few steps (or a lot of them, it's a question of point of view ;)) ! So, climb to the top of the Phare des Baleines, or the bell towers of Ars-en-Ré or Saint-Martin-de-Ré, and admire from above the white houses with orange roofs, the vineyards, the forests and the ocean as far as the eye can see! If you prefer to take off with your feet off the ground without any effort, you can also take a ride in a microlight! Sensations guaranteed!

Sail on the island or offshore!

Go for a ride on the water through the marshes in a canoe or paddle, or jump on a sail boat, a catamaran or a fishing boat and observe the coastline from your boat!

I discover !
A lire également

What to see on the Ile de Ré ? Our must-sees! With its kilometers of beach and the waves of the Atlantic Ocean, the Ile de Ré is the ideal place to learn or improve in a water sport! The weather conditions, the plethora of courses, lessons, or equipment rental, […] 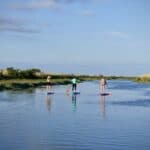 Ready to grab your paddle and head for the turquoise waters of the Ile de Ré? Enjoy an afternoon with friends to learn stand up paddling on the Ile de Ré, the ancestor of surfing.The famous American surfer and Hawaiian legend Lair Hamilton brought it to light when he crossed […]